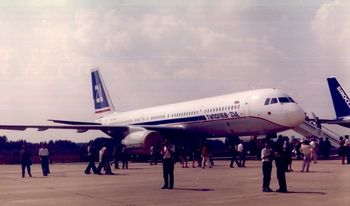 The Tupolev Tu-204 made its maiden flight on 2 January 1989. This twin-engined medium-range jet airliner is intended to replace the Tupolev Tu-154 and is of the same category like the Boeing 757 and the Airbus A321. The crisis in Russia following the end of the Cold War led to low rate orders when its competitors still evolved. Neverless, Tupolev don't stop to upgrade its airliner and several variants are availiable mainly under the company names Tu-204 and Tu-214. Some airframes were christened Tu-206 (experimental) and the Tu-204-300 was displayed sometimes as the Tu-234. The Tupolev Tu-214R is in fact a SIGINT (SIGnal INTelligence) platform for the Russian Air Force.

A hundred Tupolev 204/214/234 have been built and the production line is stil alive.

This page lists all films that feature a variation of the Tupolev 204 family.