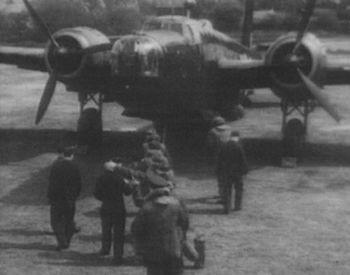 Vickers 285 Wellington Mk.I seen in The Story of Aviation.

The Vickers Wellington was a British twin-engine, long range medium bomber designed in the mid-1930s. It was widely used as a night bomber in the early years of the Second World War, before being displaced as a bomber by the larger four-engine "heavies" such as the Avro Lancaster. The Wellington continued to serve throughout the war in other duties, particularly as an anti-submarine aircraft. It was the only British bomber to be produced for the entire duration of the war. More than 11000 aircraft built.

This page lists all films that feature the Vickers Wellington.