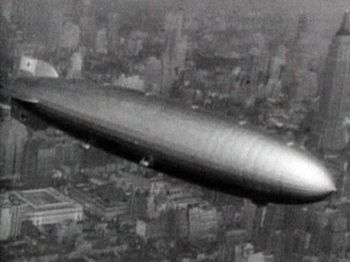 Zeppelin LZ 129 Hindenburg seen in The Story of Aviation .

LZ 129 Hindenburg (Luftschiff Zeppelin #129; Registration: D-LZ 129) was a large German commercial passenger-carrying rigid airship, the lead ship of the Hindenburg class, the longest class of flying machine and the largest airship by envelope volume. Designed and built by the Zeppelin Company (Luftschiffbau Zeppelin GmbH) on the shores of the Bodensee (Lake Constance) in Friedrichshafen, the airship flew from March 1936 until destroyed by fire 14 months later on May 6, 1937, at the end of the first North American transatlantic journey of its second season of service. Thirty-six people died in the accident, which occurred while landing at Lakehurst Naval Air Station in Manchester Township, New Jersey, United States.

This page lists all films that feature the Zeppelin LZ 129 Hindenburg .