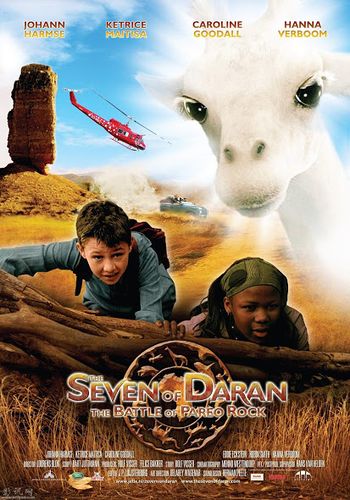 Movie (2008)
English title: The Seven of Daran: The Battle of Pareo Rock

"The Battle of Pareo Rock" tells the story of Jimmy, an 11-year old European boy who goes to Africa with his mother, a busy executive charged with establishing a golf resort. However, on arriving they find themselves caught up in a war situation between rival indigenous tribes fighting over the land. To his surprise, Jimmy meets the talking giraffe, Seraf, at a busy market. Seraf tells Jimmy that he cannot easily avoid this tribal battle. But together with Charita, a poor African girl, Jimmy embarks on an adventurous and magical trip through the African jungle, where they must overcome many obstacles. Fortunately they have help, not only from Seraf, but also from a precious medallion. Throughout their trip, they discover that they can only achieve their goal if they truly believe in themselves and don't let anybody or anything get in their way.