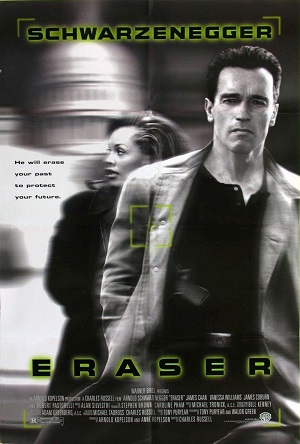 A Witness Protection specialist, John Kruger, becomes suspicious of his co-workers when dealing with a case involving stolen high-tech weapons.

Federal transport for the WitSec agents. To escape corrupt agents on board, Kruger throws a seat out the side door which is sucked through the right engine, damaging it. He then parachutes out. DeGuerin orders the pilot to turn around and ram into him, but Kruger shoots out the windshield, forcing the pilot to abandon his attempt and make an emergency landing. Registration N727BE, Serial 18933/185. Same aircraft in other works at IMPDb: Frequently Seen Aircraft.

Chief Beller is riding in this helicopter when Kruger telephones him from the church.

Another JetRanger arrives with Beller's AW109 at the climax. Registration N2044C, Serial 3363. Same helicopter in other movies at IMPDb: Frequently Seen Aircraft.

Used by DeGuerin to abduct Lee from the roof of the Cyrez building. Registration N582RI.

Chief Beller and a team of WitSec agents arrive in a second AW109 at the climax. Registration N30ZRP.