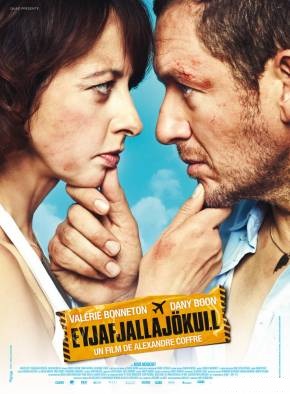 Valérie and Alain, divorced, are aboard the same plane, en route to their daughter's wedding. But we are in March 2010 and the eruption of the Icelandic volcano Eyjafjallajökull puts an end to every commercial flight. Their plane lands in Germany and they still have 2,000 km before reaching Corfu, the wedding place. They have to swallow their pathological hatred for each other and team up to face road's hazards.

Usually with wheel fairings which seem lacking.
Slovenian registration (S5-E..) probably false as this action is filmed at Antwerp International Airport (one hangar wears the colors of VLM airline). The next aircrafts are usual on this airport and despite their invisible registration, we can guess them (most on the Belgian registry [OO-...]).

Fokker 50 of CityJet and Cessna 208 Caravan far away (on the right).

From left to right : the Robin HR-100 and Fokker 50 (see above), what seem to be a Cessna 680 Citation Sovereign and a Cessna 525B Citation Jet CJ3 of FLYING SERVICE (or a Cessna 525A Citation Jet CJ2+ of AIR SERVICE LIEGE). The Piper PA-44-180 Seminole is blue and white, the colors of BAFA (registration OO-TMV).