Difference between revisions of "Fast and Furious" 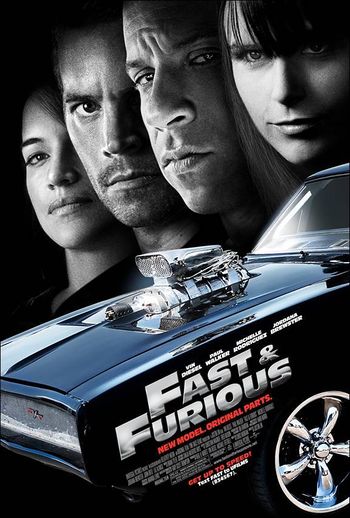 Five years after fleeing the US, Dom and his new team are now into hijacking fuel tankers in the Dominican Republic. When he realizes how close the police are getting, he flees to Panama City, leaving his friends behind. Some time later, Dom's sister Mia calls to inform him that his old girlfriend Letty has been murdered. Dom makes the difficult decision to return to the US, risking his freedom to get revenge.

In the meantime, Brian has joined the FBI and while investigating some drug dealers in Los Angeles, he runs into Dom for the first time since letting him escape years ago. After realizing that they are each looking for the same group, they individually work their way into a road race, arranged by Ramon Campos, the right hand man of the powerful drug dealer Arturo Braga. Later, while smuggling drugs from Mexico into the US for Braga, Dom figures out who Letty's murderer is and ends up killing him.

FBI helicopter used to supervise Brian O'Conner as he investigates the drug trafficking.