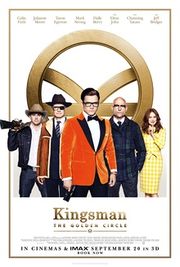 
The plot follows the members of Kingsman needing to team up with their American counterpart, Statesman, after the world is held hostage by Poppy Adams and her drug cartel, "The Golden Circle".

Used by US Army.

Statesman's plane. Used by Kingsman agents to travel to Cambodia.

Silver Pony. Used by agent Whiskey to travel to Cambodia.