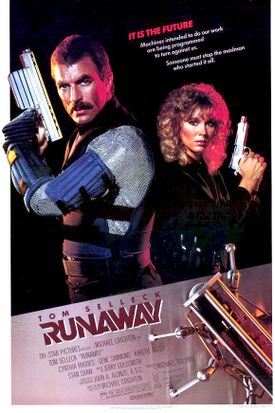 Jack Ramsay is a police officer who specializes in handling malfunctioning robots, termed "runaways" that turn dangerous on their owners. He and his new partner Karen Thompson stumble onto a plot by insane inventor Charles Luther to deliberately program robots to kill.

Police helicopter. Flies Ramsay and Karen to a farm to handle a runaway pest control robot. It has painted over rear windows and no visible registration.

Luther's helicopter which he uses to escape from the hotel. It's later used to tail the police convoy. Registration C-GMTB, Serial 31-0918D.