Difference between revisions of "The Fast and the Furious" 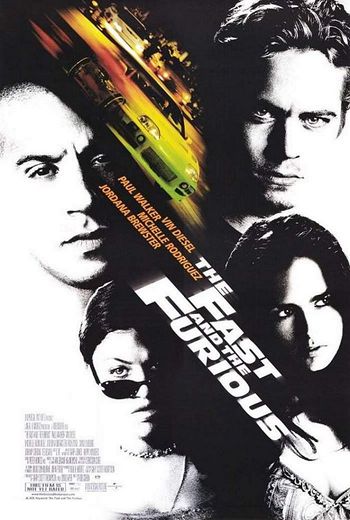 The Fast and the Furious theatrical movie poster.

After a series of robbery attacks on some semi trucks in California, undercover L.A.P.D. officer Brian O'Conner is sent to investigate the world of illegal street racing. He makes friends with Dominic Toretto, the street racing champ. Along the way, Brian also befriends Dom's sister Mia and they end up falling in love. Brian soon realizes that it's Dom leading these attacks.

The next time the team goes out, Brian convinces Mia to help him stop her brother. This time is different however when the team soon finds out that this trucker was prepared for them and has armed himself. With the help of Brian, they all end up escaping the truck they were suppose to be robbing. Because Brian doesn't want to give up Mia and his new friends, he finds himself allowing Dom to get away, putting his career in jeopardy.

The rescue helicopter used to bring Vince to the hospital after suffering major injuries from the semi truck robbery. Registration is N901KP.