The High and the Mighty 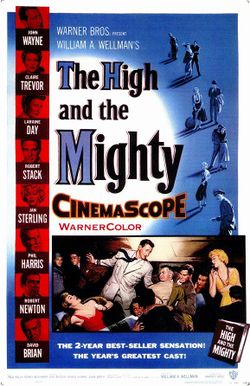 The High and the Mighty movie poster.

A commercial airliner suffers a mechanical problem during a flight. The pilot loses his nerve leaving it to his washed up co-pilot to save the day and land the troubled flight safely.

Also partially visible in the first image are a Douglas DC-3 (tail) and a Curtiss C-46 (nose).
Registration N4665V, c/n 10538 built in 1945. This C-54 wears a livery of the fictional TOPAC-Trans Orient Pacific Airlines Company, which is based on the livery of Transocean Air Lines, who operated the aircraft at the time. Footage reused in The Girl from U.N.C.L.E.‎ - IMPDb: Frequently Seen Aircraft.

Built by Fairchild Aircraft or Raytheon or Convair depending the radio command guidance system used.