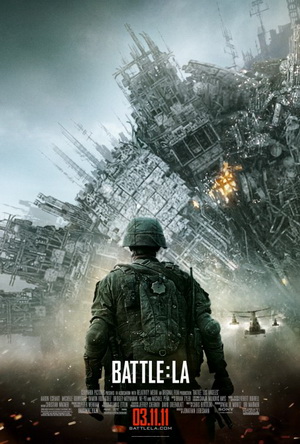 A United States Marine Corps unit sent 'behind enemy lines' to evacuate civilians ends up being the last remaining unit in Los Angeles. They must fight their way to safety, rescuing civilians and establish how to eliminate a completely new breed of enemy.

Shown as the USMC workhorse throughout the film, it the USMC's primary medium-lift, cargo helicopter.

These are also seen throughout the film, but are not actually active military aircraft as the Marines only operate the twin-engined hueys.

This aircraft with modex 605 is used in multiple occasions, as well a being shot down once and reincarnating.

Some twin engined UH-1N/Y can also be seen if you look carefully.

Actual USMC aircraft seen in the background on various occasions.

UH-1N on the left with a Bell AH-1Z Viper attack helicopter on the right.

The USMC's primary attack helicopter. Also seen in the background a lot.

AH-1Z Viper on the right.

On the ramp at the Marine Corps base.