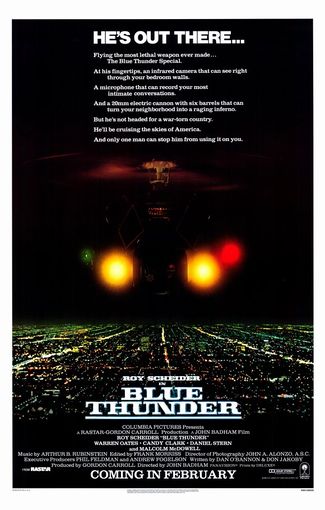 Vietnam veteran Frank Murphy is a police helicopter pilot chosen to test out an experimental military helicopter. When he discovers that corrupt government officials (including his former commanding officer from 'Nam, Colonel Cochrane) intend to use it to incite civil unrest, Murphy steals it and goes on the run.

Several are used extensively by the police including Murphy and his spotter, Lymangood. Theirs (not pictured) carries Registration No. N2044C, Serial 3363 (see IMPDb: Frequently Seen Aircraft) except for a couple of shots where N250CA is substituted. Murphy and Lymangood also fly a civilian JetRanger in one scene, Registration N200NP, Serial 3264, which crashes (safely) due to being sabotaged beforehand by Cochrane.

Seen (interior only) in Murphy's traumatic Vietnam flashbacks, wherein Cochrane throws a prisoner of war out to his death.

The title aircraft is a heavily modified Aérospatiale Gazelle (in the special features on the DVD, director John Badham repeatedly misidentifies the helicopter used as being an Aérospatiale Alouette, however) Reg. N52BT, Serial 1075, also seen in MacGuyver and Firefox at IMPDb: Frequently Seen Aircraft It is designated "The Special" but nicknamed "Blue Thunder." After stealing it to prevent it from being used by the government and using it in numerous aerial chase sequences, he lands it on a railroad track so that it is hit and destroyed by an oncoming train.

These planes are seen on display in the Travel Town Museum in Griffith Park briefly while Murphy is talking to Montoya.
Cutlass BuNo 129655. Moved to the National Naval Aviation Museum in Pensacola, Florida in 1993, where it is still on display.
Neptune BuNo 124359. Owned by the Central California Historical Military Museum as of 2013, stored in pieces at Eagle Field in Fresno County, California.

Seen on the police station helipad.

Seen used as a news helicopter.

Two fighter jets are dispatched to shoot down Murphy after he steals Blue Thunder. Unlike the helicopters, they are models rather than full-size jets. Murphy shoots down one (its pilot ejects safely).

Cochrane comes after Murphy personally in a helicopter equipped with machine guns. Registration N58428, Serial 1290624D, also seen in other movies at IMPDb: Frequently Seen Aircraft. After a lengthy pursuit, Murphy performs a loop with Blue Thunder and shoots Cochrane down.