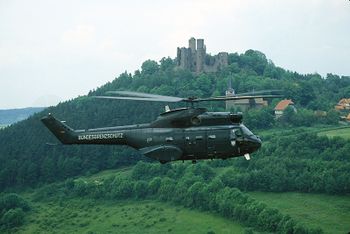 Puma of the German Federal Police

The Aérospatiale SA 330 Puma is a twin-engined, four bladed, medium lift helicopter in primary use with the French Army and Royal Air Force. It has subsequently been replaced with the Eurocopter AS332 Super Puma and the military version, the AS532 Cougar. The Super Puma has been used by 37 military forces, and over 1,000 civilian operators.

This page lists all films that feature a variation of the Aérospatiale SA 330 Puma. For the improved variant, see Eurocopter AS332 Super Puma.

The following 41 pages are in this category, out of 41 total.