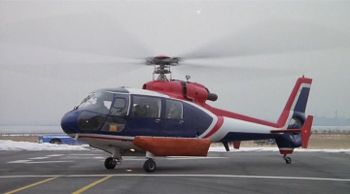 The Aérospatiale SA 360 Dauphin, is a single engined,medium-lift, multi-purpose helicopter used widely in military and governmental operations. It has since been developed into a twin-engined version the SA/AS365 Dauphin 2 with improved engines and avionics. AS 365 military versions are designated as Panthers. The helicopter is distinguished by its encased tail rotor and horizontal stabilizer.

This page lists all films that feature a variation of the Aérospatiale SA 360 Dauphin. For the twin-engined variant, see Eurocopter SA/AS365 Dauphin 2.