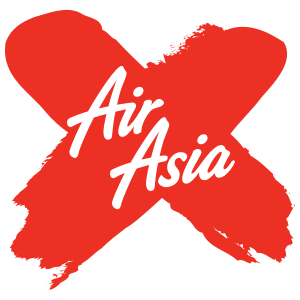 AirAsia X Berhad (previously known as FlyAsianXpress Sdn. Bhd.), operated as AirAsia X, is a long-haul, budget airline based in Malaysia; and a sister company of AirAsia. It commenced operations on 2 November 2007 with its first service flew from Kuala Lumpur International Airport, Malaysia, to Gold Coast Airport in Australia. AirAsia X flies to destinations within Asia and Australia. The airline operates a fleet of 18 aircraft and has placed orders for more. AirAsia X is the medium and long-haul operation of the brand AirAsia, which is Asia's largest low-cost carrier. The franchise is able to keep costs down by using a common ticketing system, aircraft livery, employee uniforms, and management style. Its affiliate airlines are Thai AirAsia X (2014-present) and Indonesia AirAsia X (2014-2019).

This page lists all films, TV series, and video games that feature aircraft of AirAsia X.