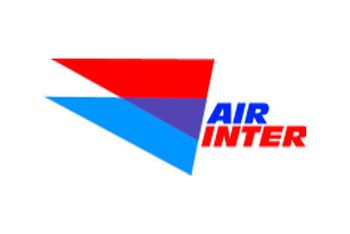 Air Inter (Lignes Aériennes Intérieures) was a semi-public French domestic airline. It operated its first commercial flight between Paris and Strasbourg on 16 March 1958. However, it was 1960 when the airline started regular commercial services. The company established its operational and engineering base at Paris-Orly Airport, where its flights were concentrated at Orly Ouest, Orly Airport's West Terminal. In 1990 Air Inter, with UTA-Union de Transports Aériens and Air France, became part of an enlarged Air France group, which in turn became a subsidiary of Groupe Air France. Air Inter changed to Air France Europe following a merger with Air France and UTA. On 1 April 1997, it was absorbed into Air France. On that day, the firm ceased to exist as a legal entity within Groupe Air France.

This page lists all films, TV series, and video games that feature aircraft of Air Inter.