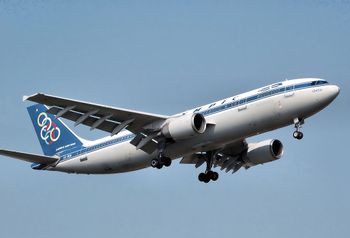 Airbus A300 operated by Olympic Airlines.

The Airbus A300 is a twin-engined, short- to medium-range, widebody airliner. It is notable for being the first widebody twinjet. It was produced in both passenger and cargo versions, with a conversion programmes available for existing passenger aircraft. The aircraft is used extensively in cargo configurations and the last aircraft produced was an A330F in July 2007.

This page lists all films that feature a variation of the Airbus A300.

Pages in category "Airbus A300"