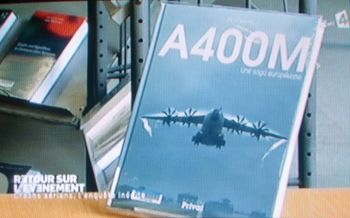 The Airbus A400M is a multi-national four-engine turboprop military transport aircraft. First intended to replace both Lockheed C-130 Hercules and Transall C-160, the study group was leaved by Lockheed in 1989. Under the name of Euroflag, the european aircraft manufacturers tried to face military budget cuts which led Airbus eventually as manufacturer through a new branch : Airbus Military.
In 2003 the engine was selected in favor of a new design, the Europrop TP400. As the same time, the seven european partner nations and Turkey signed an agreement for 212 aircraft, a number reduced to only 174 airframes after both financial crisis of 2008 and 2006 Airbus crisis.
The first flight occured on 11 December 2009 and first operational cargo was delivered on 2013.
Christined first as the Grizzly (prototype and development aircrafts), it is widely known as the A400M Atlas.

This page lists all films that feature a variation of the Airbus A400M.