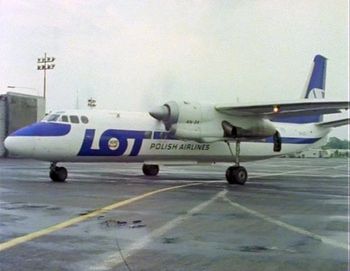 An-24 of LOT Polish Airlines seen in 07 zgłoś się.

The Antonov An-24 is twin-turboprop transport aircraft designed and produced in the Soviet Union. It was produced between 1959 and 1979 and a large number are still in operated around the world with over 200 in airline service. The An-24 spawned the development of other similar aircraft such as the An-26, An-30, and the Chinese license-produced Xian Y-7 and MA60.

This page lists all films that feature a variation of the Antonov An-24.

Pages in category "Antonov An-24"

The following 49 pages are in this category, out of 49 total.