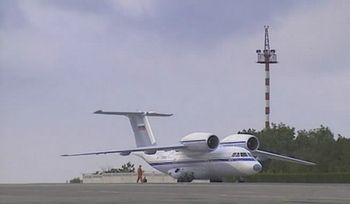 Antonov An-72 in Tebe nastojaŝemu.

The Antonov An-72 (NATO reporting name Coaler) is a Soviet transport aircraft, developed by Antonov. It was designed as a STOL transport and intended as a replacement for the Antonov An-26, but variants have found success as commercial freighters. The An-72 and An-74 get their nickname, Cheburashka, from the large engine intake ducts, which resemble the oversized ears of the popular Soviet animated character of the same name. The An-72 first flew in December 1977. Produced in tandem with the An-72, the An-74 variant adds the ability to operate in harsh weather conditions in polar regions, because it can be fitted with wheel-skis landing gear, de-icing equipment and a number of other upgrades allowing the aircraft to support operations in Arctic or Antarctic environments. Other An-72 versions include the An-72S VIP transport and An-72P maritime patrol aircraft.

This page lists all films, TV series, and video games that feature the Antonov An-72.

Pages in category "Antonov An-72"