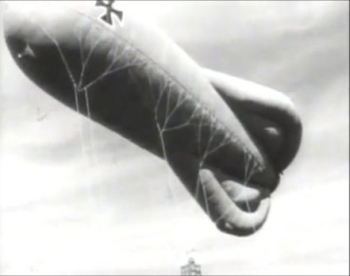 In the beginning of the First World War, balloons companies have only spheric ones, unstable with the slowest winds. Germany has designed the Drachen just a little bit more efficent. When the french engineer Albert Caquot was enlisted and commanded an airship company, he quickly understood the weakness of the french balloons as like as the german Drachen. He sent to the headquater the draft of what will be the L type. The production was under the responsability of the military "Atelier aérostatique" based in Chalais-Meudon.
With its three tails at 120°, the dirigible is able to stay stable in the stream of a wind up to 90 km/h (56 mph). Observations were far more better and greatly improved effectivness of battery fire, aerial watching, etc... But one of the first exemplaries cut its cables and was captured by germans who quickly understood its qualities, then produced it under the name Ae 800. The Caquot dirigible was provided in several types to the Allies and still served a long time after the end of the war.

Thousands of Caquot dirigibles and derivatives of all variants have been built.

This page lists all films that feature a variation of the Caquot dirigible.