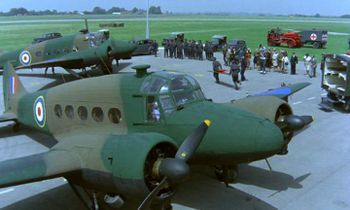 The Avro Anson is a British twin-engine, multi-role aircraft that served with the Royal Air Force, Fleet Air Arm and numerous other air forces prior to, during, and after the Second World War. By the end of production in 1952, the Anson spanned nine variants and a total of 8,138 were built in Britain by Avro. From 1941, a further 2,882 were built by Canadian Federal Aircraft Ltd.

This page lists all films that feature a variation of the Avro Anson.