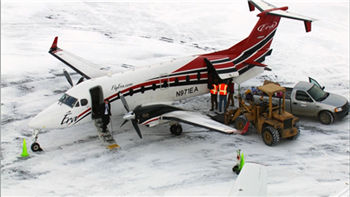 The Beechcraft 1900 is a 19-passenger, pressurized twin-engine turboprop fixed-wing aircraft manufactured by the Beechcraft Division of the Raytheon Company (now Beechcraft). It was designed, and is primarily used, as a regional airliner. It is also used as a freight aircraft, corporate transport, and by the United States military and other governments. The aircraft is designed to carry passengers in all weather conditions from airports with relatively short runways. It is capable of flying in excess of 600 miles (970 km), although few operators use its full-fuel range. In terms of the number of aircraft built and its continued use by many passenger airlines and other users, it is one of the most popular 19-passenger airliners in history. A total of 695 aircraft built from 1982 to 2002 last year of production.

This page lists all films that feature the Beechcraft 1900.