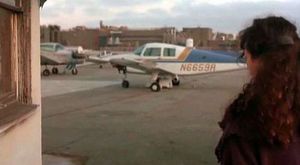 The Beechcraft Musketeer is a family of single-engine, low-wing, light aircraft that was produced between 1963 and 1983. The first of the line was the Model 23. In 1966, the Model 23 was introduced but lacked the 23’s third side window. Retracting the landing gear is the trade mark of the Model 24R. The Canadian Forces purchased twenty-four model B23 under the name CT-134 Musketeer. Some other air forces used the Musketeer in its civilian variant.

4 366 airframes of this family have been built.

This page lists all films that feature the Beechcraft Musketeer.