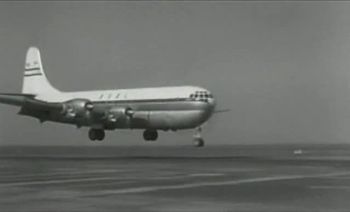 The Boeing 377 Stratocruiser, was a long range airliner built after World War II by adapting an enlarged upper fuselage onto the lower fuselage and wings of a modified B-50 Superfortress, high-performance evolution of the B-29 Superfortress bomber. It had been operated by several airlines on their long range routes, with Pan American World Airways bein the most important user of the 377 during the 1940’s and early 50’s. A freight and tanker variant were also produced as C-97 Stratofreighter and KC-97, for military uses.

About 60 Stratotcruisers were produced till 1950, and 60 more for military purpose. In the 1960s, Aero Spacelines modified several Stratocruisers to make oversized transports, dubbed "Guppys".

This page lists all films that feature a variation of the Boeing 377 Stratocruiser.

The following 42 pages are in this category, out of 42 total.