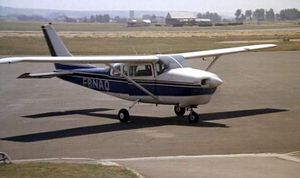 The Cessna 210 is a six-seat, high-performance, retractable-gear, single-engine general aviation aircraft which was first flown in January 1957 and produced by Cessna until 1985. The Cessna 210 was manufactured in 26 model variants as 210, 210 Centurion and 210 Turbo Centurion. A further development gave a new family of Cessna aircraft including the, 205, 206 and the eight seat 207 (see Cessna 206 Series).

This page lists all films that feature a variation of the Cessna 210.