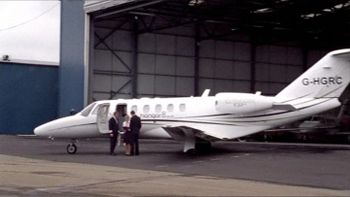 The Cessna 525 CitationJet is a light turbofan business jet made by Cessna. Launched as a replacement for the Citation I in 1989, it is currently the second smallest of the Citation families above only the Citation Mustang in the range. The plane is available in different lengths (referred to as CJ1, CJ2, CJ3 and CJ4) that have been developed over the production run. An unsuccessful, tandem-seat variant the 526 CitationJet has also been developed for a Jet Trainer role but only two prototypes were made.

This page lists all films that feature a variation of the Cessna 525 CitationJet.