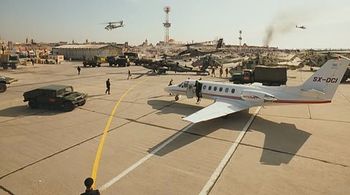 The Cessna Citation V (Model 560) is a turbofan-powered, small-to-medium sized business jet, streched version of the former Citation I and II. It was the basis for one of the families of Citation, including the Citation Ultra, the Citation Encore, and the Citation Encore+. Some models are used by the United States military under the designation UC-35. By the time the aircraft was superseded in 1994, 262 had been built.

This page lists all films that feature a variation of the Cessna 560 Citation V.