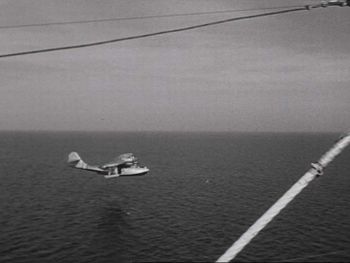 Consolidated PBY-5 Catalina used in Panic in the Streets.

The Consolidated PBY Catalina was an American flying boat of the 1930s and 1940s produced by Consolidated Aircraft. It was one of the most widely used multi-role aircraft of World War II. About 4000 Catalinas of any variants were produced. USAAF/USAF designation of the PBY was OA-10, Canadian Vickers built aircrafts were named Canso, and a soviet built version: the GST.

This page lists all films at IMPDB that feature a variation of the Consolidated PBY Catalina.

The following 58 pages are in this category, out of 58 total.