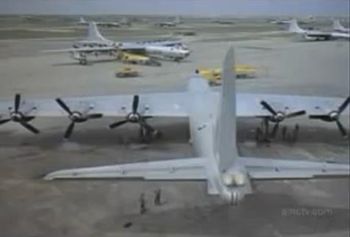 The Convair B-36 was the largest mass-produced piston engine aircraft ever made. The RFP (Request for Proposal) was think to overcome a possible fall of Britain and need for a real transoceanic bomber. The goals were reduced due to technological limitations but staid far beyond the capacities of front-line bombers of any country. The study started by Consolidated spread slowly for Convair -as the company were then named after WW2. This ambitious programm and the priority given to production and immediate project led to report the delivery and first flight. At a time of reduction of armed forces, the project was saved by a serie of international political events such the Berlin Airlift and the first russian atomic bomb : the Pacemaker was the only aircraft able to carry the A-bomb as far as the soviet objectives. Despite piston-powered, the B-36 was superior to its counterparts of the SAC (B-29, B-50 and B-47) mainly by its radius and its ability to carry the first H-bomb until the B-52 became opearational in 1955.From the -D model, four jet engines were added to the six piston ones. Numerous bomber were later converted to the strategic reconnaissance role before being withdrawn from service in 1959.

This page lists all films that feature a variation of the Convair B-36.

Pages in category "Convair B-36 Peacemaker"