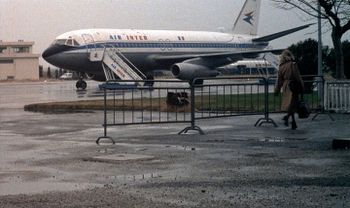 The Dassault Mercure was a French twin-engined jet-powered airliner. It was proposed in 1967, first production flight was in 1973 and last flew in 1995. Dassault tried to attract major airlines to its product, and several regional airlines, by touting the Mercure 100 as the replacement for the Douglas DC-9. A few airlines showed some initial interest, but none placed an order, other than Air Inter, a domestic French airline. This lack of interest was due to several factors, including the devaluation of the dollar and the oil crisis of the 70's, but mainly because of the Mercure's operating range – suitable for domestic European operations but unable to sustain longer routes. At maximum payload, the aircraft's range was only 1700 km. Consequently, the Mercure 100 achieved no foreign sales. With a total of only 10 sales with the one of the prototypes refurbished and sold as the 11th Mercure to Air Inter, the airliner represents the worst failure of a commercial airliner in terms of aircraft sold.

This page lists all films that feature a variation of the Dassault Mercure.