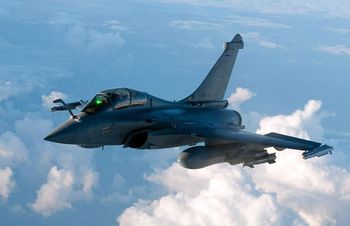 The Dassault Rafale is a French twin-engine delta-wing fighter and multirole combat aircraft; capable of simultaneously undertaking air supremacy, interdiction, reconnaissance, and the airborne nuclear deterrent missions. Introduced in 2000, the Rafale is being produced for both the French Air Force and for carrier-based operations in the French Navy. It has also been marketed for export to several countries, including selection by the Indian Air Force. The Rafale has been used in combat over Afghanistan and Libya; features such as the SPECTRA integrated defensive aids system have been crucial advantages in these theatres. Several upgrades to the radar, engines, and avionics of the Rafale are planned to be introduced in the near-future.

This page lists all films that feature the Dassault Rafale.