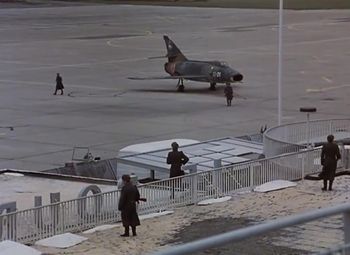 The success of Dassault Mystère IV led Dassault to a better formula : a sweep wing with 45°, a better cockpit with an increased field of view and and the use of an afterburner-equipped turbojet engine (Rolls-Royce Avon). The prototype was christened Super-Mystère B1 but despite good performance, French Air Force required a French powerplant. Fourteen months later (in May 1956), the Super-Mystère B2 was in the air pushed by a one SNECMA Atar 101G-2 turbojet. The Super-Mystère was the first Western European supersonic aircraft to enter mass production but quick technological progress limited its carreer. Only France and Israel ordered it as the Mach 2 class Dassault Mirage family was already on test. SMB2 (common nickname) quickly switched from fighter to fighter bomber and the type soldired on until the mid seventies. From 1973, Israel upgraded its fleet with the Pratt & Whitney J52-P8A and in 1976 sold twelve airframes to Honduras. They were the last operational SMB2 after two decades with numerous border skirmishes with Sandinista Nicaragua before retiring in 1996.

This page lists all films that feature the Dassault Super-Mystère B2.

Pages in category "Dassault Super-Mystère B2"