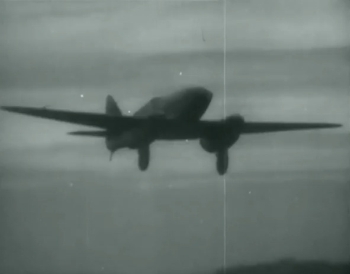 De Havilland DH88 Comet seen in The Conquest of the Air.

The De Havilland DH88 Comet was specifically designed for the 1934 MacRobertson Air Race. It set many aviation records before being used as a fast long range pioneer mail plane. Accidents and war in Europe put an end to their use until the 1980s when restoration was done on one airframe then a second one discovered in Portugal. Two flying replicas were built at the end of the century. A total of five original aircraft were built.
The de Havilland DH.88 Comet must not be confused with the Caudron C.640 Typhon sharing a similar shape but the vertical stabilizer.

This page lists all films that feature a variation of the De Havilland DH88 Comet.