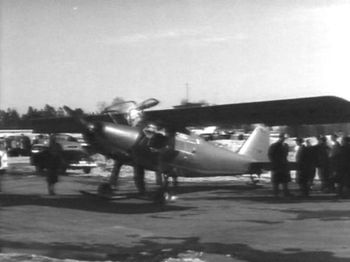 Dornier Do 27B-1 in Filmavisen.

The Dornier Do 27 was a German single-engine STOL utility aircraft, manufactured by Dornier GmbH (later DASA Dornier, Fairchild-Dornier). Configuration was a classic high-wing, "tail-dragger" aircraft with fixed landing gear.
Dorniers facilities in Spain designed the Do 25, to a Spanish military requirement for a light utility aircraft, as a precursor to the production Do 27. Powered by a single 110 kW (150 hp) ENMA Tigre G.V engine, the Do 25 was not selected for production.
The Do 27 seated four to six, and the original prototype first flew in Spain on 27 June 1955. Most production aircraft were built in Germany, the first German-built aircraft taking flight on 17 October 1956. 50 more were manufactured in Spain by Construcciones Aeronáuticas SA as the CASA-127.
The German Air Force and German Army ordered a total of 428 of the Do 27A and Do 27B, among a total of 628 airplane built. The Do 27 was notable for being the first mass-produced aircraft in Germany after World War II. It was appreciated for its relatively wide, comfortable cabin and excellent short-field performance.

This page lists all films that feature a variation of the Dornier Do 27.

Pages in category "Dornier Do 27"