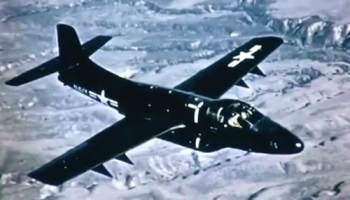 The Douglas F3D Skyknight was twin-engined, mid-wing jet fighter aircraft manned by a crew of two in a side-by-side configuration. The F3D was designed as a carrier-based all-weather night fighter and saw service with the United States Navy and United States Marine Corps. After a first flight on 23 March 1948, the aircraft entered service in 1951 and saw action in Korea. The mission of the F3D was to search out and destroy enemy aircraft at night. After 1962, it was named F-10 Skyknight. Later during the Vietnam War, it served as an electronic warfare platform, a logical step after its role in the development of the radar-guided AIM-7 Sparrow missile. If the last military flight occured in 1970, Raytheon used some airframes as flying testbed until the 80's.

265 Douglas F3D Skyknight have been built

This page lists all films that feature a variation of the Douglas F3D Skyknight.