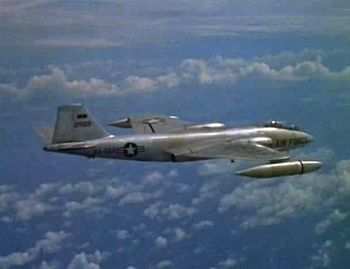 Martin B-57B Canberra seen in Trinity and Beyond: The Atomic Bomb Movie.

The English Electric Canberra is a first-generation jet-powered light bomber manufactured in large numbers through the 1950s. The Canberra could fly at a higher altitude than any other bomber through the 1950s and set a world altitude record of 70,310 ft (21,430 m) in 1957. Due to its ability to evade early interceptors and providing a significant performance advancement over piston-engined bombers then common, the Canberra was a popular export product and served with many nations. In the United States, where the US Air Force needed to replace the B-26 Invader, 403 Canberras were manufactured under licence by Martin as the B-57 Canberra in several versions. While these were initially almost exactly the same as the English Electric pattern aircraft apart from the tandem crew seating, later models featured a series of substantial modifications. In Australia, the Government Aircraft Factory (GAF) built 48 for the Royal Australian Air Force, broadly similar to the British B2 but with a modified leading edge, increased fuel capacity and room for three starter cartridges. In the United Kingdom, the demand for Canberras exceeded English Electric's ability to supply airframes, and so Handley Page, Avro and Short Brothers manufactured them under licence. 901 Canberras were manufactured in the UK, making total worldwide Canberra production 1,352 (including 403 made in the USA and 48 in Australia).

This page lists all films that feature a variation of the English Electric Canberra / Martin B-57 Canberra.