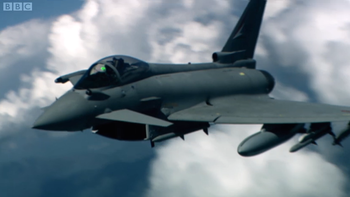 The Eurofighter Typhoon is a twin-engine, canard-delta wing, multirole combat aircraft, made by Eurofighter, a consortium of European aircraft manufacturers (EADS, Alenia Aeronautica and BAE Systems) and developed from the one-off BAE EAP. Since its introduction in 2003 it has been adopted by a number of European air forces in both single and two seater trainer variants with 300 having been built of the 421 ordered. Whilst the Typhoon is currently used mainly by European air forces there is an attempt to increase exports to make the project more profitable for the European Union.

This page lists all films that feature a variation of the Eurofighter Typhoon.