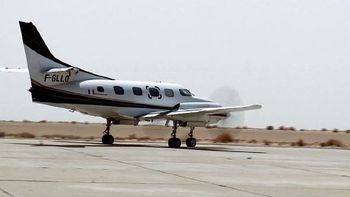 The Fairchild-Swearingen Merlin is a pressurised, twin turboprop business aircraft first produced by Swearingen Aircraft, and later by Fairchild. The Merlin was an evolution of earlier modification programmes performed by Swearingen Aircraft. Ed Swearingen started the developments that led to the Merlin through gradual modifications to the Beechcraft Twin Bonanza and Queen Air business aircraft which he dubbed Excalibur. Then hybrid aircraft was developed, with a new fuselage and vertical fin, mated to salvaged and modified Queen Air wings and horizontal tails, and Twin Bonanza landing gear. This was the SA26 Merlin, more-or-less a pressurized Excalibur but fitted with a different model engine, the Lycoming TIGO-540 6-cylinder geared piston engine. The TIGO 540 was used despite the fact that one of the reasons the IO-720 was used in the Excalibur was that the Queen Air series' IGSO-480 and IGSO-540 engines from the same manufacturer were so troublesome. The decision was soon made to offer increased engine power, this was achieved through installing two Pratt & Whitney Canada PT6A-20 turboprop engines, resulting in the SA26-T Merlin IIA.

This page lists all films that feature the Fairchild-Swearingen Merlin .