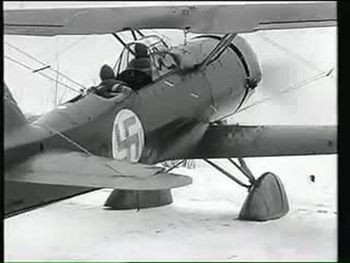 The Fokker C.X was a biplane scout and light bomber designed in 1933. The pilot was in enclosed cockpit when the observer was in an open station to handle the rear machine gun. A batch of 13 aircraft was ordered by the West Indies. 20 others were used by the Koninklijke Luchtmacht (Royal Netherlands Air Force) with some success in May 1940. But most of the type's activity was done under the Finnish colors, thanks to their actions from 1939 until 1945. In fact, the type last flight occurred in 1958.

The production line was stopped after 68 airfames built.

This page lists all films that feature a variation of the Fokker C.X.