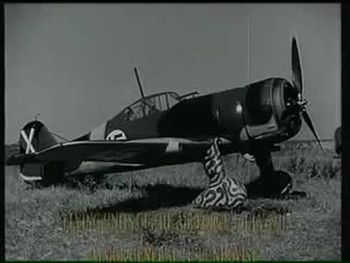 The Fokker D.XXI was designed as an inexpensive, rugged, and compact fighter aircraft following requirements laid out by the Royal Netherlands East Indies Army Air Force in 1934. But Finland was the first country to order it and made great use of their 97 D.XXI. Netherlands eventually bought 36 fighters for the homeland air force (Luchtvaartafdeling (Dutch Army Air Force)) and Danish Army Aviation Troops received 13 airframes. Despite its fixed landing gear, the maximum speed was high but outdated at the outbreak of war. During the Blitzkrieg, the Fokker was outnumbered by the Luftwaffe and between hands of the Finns, it proved a valuable asset to challenge Soviet types.

The production line was stopped after 148 airfames left the assembly line.

This page lists all films that feature a variation of the Fokker D.XXI.