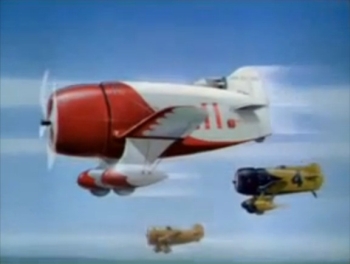 The Gee Bee Model R was a sport low wing monoplane aircraft derivated from the previous year's Thompson Trophy-winning, the Model Z. The engine has 275 hp in addition which allows a top speed increased by 27 mph (44 km/h). At the controls of the R-1 #11, Jimmy Doolittle (later famous for the first raid launched under his command against the Japan in February 1942) won the 1932 Thompson Trophy race. But the same airframe killed the racing pilot Russell Boardman the following year. The R-2, stretched of approximately 18 inches has had a similar dangerous career. Replicas built at the end of the century could be flown in a safer way, thanks to a better knowledge of aerodynamics.

Only two Gee Bee Model R were built in 1932. Two non-flying and one flying replicas were built at the end of the 20th century.

This page lists all films that feature a variation of the Gee Bee Model R.