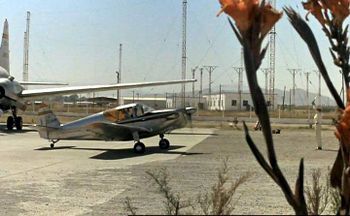 The Globe GC-1 Swift was a light, two-seat sport monoplane designed by R.S. "Pop" Johnson in 1940 as a homebuilt aircraft. First flight occured in 1942 but commercial production started only in 1946 with a 85 hp (63 kW) engine as GC-1A. About 400 of them were built before the airframe recieved a more powerful engine of 125 hp (93 kW). About 800 of these GC-1B were built ahead commands and eventually led the company into insolvency. Its company partner, TEMCO, obtained the type certificate, tooling, aircraft, and parts but shutting Swift production down in 1951.

This page lists all films that feature a variation of the Globe GC-1 Swift.