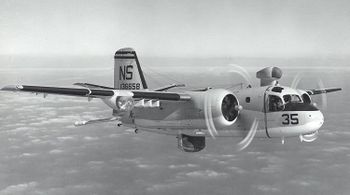 The Grumman S-2 Tracker was an anti-submarine warfare (ASW) aircraft of conventional design with twin engines, a high wing and tricycle undercarriage. Introduced in 1952, the type was used by six navies around the world. Prior to 1962, the type was named S2F.

This page lists all films that feature a variation of the Grumman S-2 Tracker.