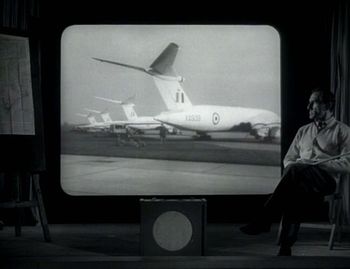 Handley Page H.P.80 Victor B.1 seen in The Avengers.

The Handley Page Victor was a British jet bomber aircraft produced by the Handley Page Aircraft Company during the Cold War. It was the third and final of the V-bombers that provided Britain's nuclear deterrent. The other two V-bombers were the Avro Vulcan and the Vickers Valiant. Some aircraft were modified for strategic reconnaissance role using both cameras and radar. After the Royal Navy assumed the nuclear deterrence mission using submarine-launched Polaris missiles in 1969 many surviving bombers were converted into aerial refuelling tankers. The last Victor was retired from service on 15 October 1993. 86 aircraft were produced all operated by the Royal Air Force.

This page lists all films that feature the Handley Page Victor.