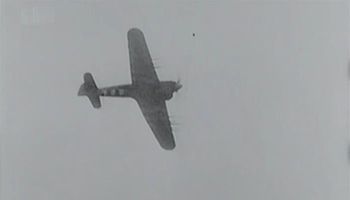 Hawker Typhoon seen in The War.

The Hawker Typhoon, was a British single-seat fighter-bomber designed to be a medium-high altitude interceptor, as a direct replacement for the Hawker Hurricane, but several design problems were encountered, and it never completely satisfied this requirement. Its service introduction in mid-1941 was plagued with problems, and for several months the aircraft faced a doubtful future.However, when the Luftwaffe brought the formidable Focke-Wulf Fw 190 into service in 1941 the Typhoon was the only RAF fighter capable of catching it at low altitudes; as a result it secured a new role as a low-altitude interceptor.armoury.

This page lists all films that feature the Hawker Typhoon.