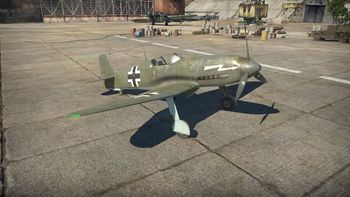 The Heinkel He 100 was a German pre-World War II fighter aircraft design from Heinkel. Although it proved to be one of the fastest fighter aircraft in the world at the time of its development, the design was not ordered into series production. Approximately 19 prototypes and pre-production examples were built. None are known to have survived the war.

Because there are no surviving examples, and since many factory documents - including all blueprints for the He 100 - were destroyed during a bombing raid, there is limited specific information about the design and its unique systems.

This page contains all films, TV series, and video games that feature the Heinkel He 100.

Pages in category "Heinkel He 100"