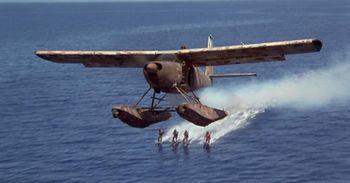 The Helio Courier is a light C/STOL utility aircraft designed in 1949. Around 500 of these aircraft were manufactured in Pittsburg, Kansas from 1954 until 1974 by the Helio Aircraft Company. During the early 1980s, new owners (Helio Aircraft Ltd.) made an attempt to build new aircraft with direct-drive Lycoming engines, to replace troublesome and expensive geared engines. In a further effort to reduce weight, a new composite landing gear was featured. The new models also featured modest winglets. Two models were produced, the H-800 and H-700. A total of 18 aircraft were built. The rights to the Helio Stallion and Helio Courier were acquired by Helio Aircraft of Prescott, Arizona, and will soon be returned to production.

This page lists all films that feature the Helio Courier.