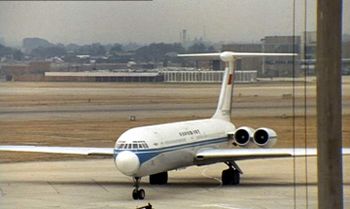 The Ilyushin Il-62 is a four-engined, long-range, Soviet airliner produced between 1963 and 1995. It pioneered jet transport in the Soviet Union and was used by over 30 airlines as well as numerous governments. The Il-62M is an improved variant.

This page lists all films that feature a variation of the Ilyushin Il-62.